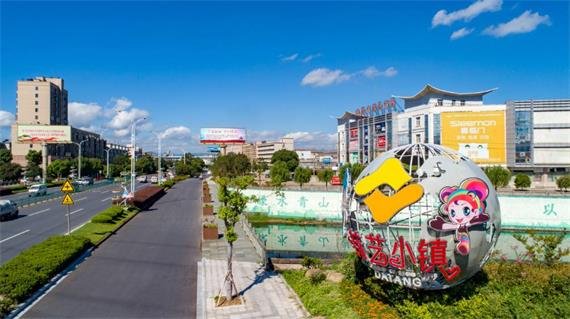 Introduction to the town

Datang is a famous socks town, in the city of Zhuji, Zhejiang Province, China. The annual output of socks here exceeds 22 billion pairs, accounting for 70% of China’s and 35% of the world’s total socks production. The annual output value reaches 75 billion yuan, and the regional brand value is estimated at 110 billion yuan. After more than 30 years of development, Datang Hosiery already has a complete industrial chain from raw materials, machinery, and hosiery to dyeing and finishing, shaping, packaging, marketing, logistics, etc. The industrial concentration ranks first in the world.

Since last year, a pair of stockings has become popular online. A man stuffed the pineapple into the stockings, pulled and stretched it, and the stockings were not damaged. Netizens called it “pineapple socks.” This pair of “magic” stockings actually uses a special technology to prevent it from falling apart. The patent comes from a socks company in the town of Datang, Zhuji, Zhejiang. “Pineapple Socks” not only let people see the infinite possibilities of socks, but also make the name Datang Socks famous. 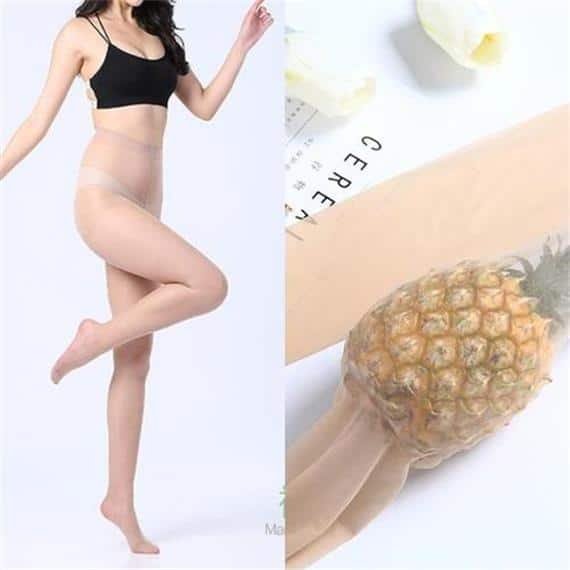 Chen Renyong said, “Of all my relatives and friends, 8 out of 10 are doing socks-related work.”

In 2008, 25-year-old Chen Renyong gave up his job as an engineer and returned to his hometown of Datang to start a business. At that time, the Datang socks industry had gone from the roadside basket-selling in the 1960s and 1970s to the centralized market in the 1990s and later, foreign trade processing, becoming a well-known socks manufacturing base in the country.

New to the business, Chen Renyong, like most Datang people, does foreign trade orders, so-called “OEM” processing. With the reputation of Datang Hosiery, Chen Renyong made his first pot of gold smoothly.

Chen Renyong said, “At that time, as long as there were machines and people, we could make money. The United States and some European countries have just started to purchase from China. Foreign businessmen don’t know how much profit we have. Our maximum annual income is more than 50 million yuan.”

After earning “quick money” for two years, Chen Renyong discovered that foreign businessmen had become “smarter” and learned to “shop around” and compete for lower prices. And Datang’s local producers began to fall into a vicious competition circle of price wars and order grabbing.

Chen Renyong said, “At that time, when we loaded and shipped our trucks, we used tarpaulins to cover the outside goods. Someone even followed us to see where the goods were sent.”

At the same time, personalized demand in foreign trade orders has increased, production costs have continued to rise, and profit margins have gradually decreased. A medium-sized company like Chen Renyong is in an awkward situation. He has to think about the transformation of the company…

At this time, Cai Shanni, who graduated from the China Academy of Art, and her classmates, designed several colorful “cute socks,” which were not sold in Datang. She came to Shanghai with unsellable socks. Unexpectedly, these “cute socks” are very popular in Shanghai.

Cai Shanni said, “At that time, I didn’t have much confidence to do it. But then, more than 20,000 pairs of socks were sold out in a week. This shows that there is a market for fashion socks.”

Back in Datang, Cai Shanni rented a shop. In 2012, a friend recommended her to Tmall Mall. She and her two other partners packed and delivered goods every day, and were very busy. However, due to limited manpower, after a period of time, she left the online shop and ran to Yiwu to rent a shop where she became a Yiwu merchant.

Cai Shanni said, “Business is so good every day. One day, I suddenly found that this is not right. If I do it like the older generation every day, keep my accounts every day, I won’t be creative. When you become a businessman, you can only make money, which is meaningless.” 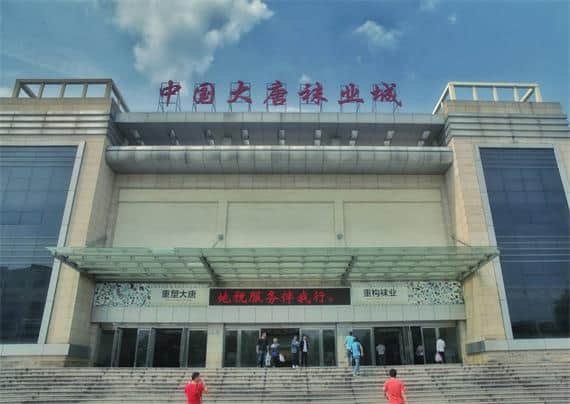 The town encountering a bottleneck period, deciding to transform

From 2014 to 2015, Chen Renyong and Cai Shanni both reached the bottleneck period of their careers. They are the epitome of the development of the entire Datang hosiery industry. At this time, the problems that had caused barbaric growth, became prominent. A local official said that there were problems with public security, environment, and transportation. When mentioning Datang, some people would say, “It is the place where garbage socks are produced.”

Mao Danfei said, “There are more fire accidents, and the environment, sanitation, and transportation are under great pressure. At that time, Datang had a registered population of more than 30,000 and a non-local population of more than 100,000. The amount of waste generated was 120 tons and there were a lot of small advertisements.”

At the end of 2014, Datang Analgesic made up its mind to carry out six special rectification actions, including the elimination of coal-fired boilers, the banning of unlicensed operations and so on. In just seven months, more than 3,000 socks enterprises were closed.

At this time, Chen Renyong determined the development direction of the company after investigation and research-create his own self-produced functional sports socks that integrate fashion elements, and become his own brand. But when the design team was formed, it was difficult because no one wanted to come.

In 2015, Zhuji City initiated the creation of a “sock town” to create an innovation platform, and Chen Renyong’s enterprises were the first to become part of it. The cooperative alliance between the town and the university, allowed Chen Renyong to finally have a design team. Since 2016, the team has obtained more than 50 national invention patents.

Chen Renyong said, “I think we have great potential, and it is also in line with the current national development situation, because our products meet the needs of domestic consumption upgrades.”

Cai Shanni finally has a clear goal—to return to the e-commerce platform. This time, she cooperated with a professional operations team. Cai Shanni concentrated on design, and her socks were renovated every year. Last year, online sales exceeded 150 million.

Cai Shanni said, “The most important thing is to understand consumer needs. One is the grasp of fashion, and the other is the grasp of comfort. The repurchase rate of our socks can reach more than 50%. There are 50 people going back and buying again.”

While companies are looking for ways to transform themselves, the Datang Town government is also actively helping. After researching for several years, the integrated sock knitting machine independently developed and produced by Datang has no less performance than imported equipment, and can make a complete sock in 2 minutes. According to Mao Danfei, last year, Zhuji City and Datang Town introduced a two-level policy. Socks enterprises who purchased fully automatic and high-efficiency integrated hosiery machines that year can be given subsidies up to 45% of the equipment investment. There have been 19 hosiery companies that have accelerated their digital transformation.

Mao Danfei said, “With 400 to 450,000 government subsidies within 1 million, personal investment is less. Digital equipment and digital sales models will develop this industry in a more efficient way.”

Now, the fashionable and individualized products of Datang Hosiery are very obvious. More and more Datang Hosiery has given up on processing, paying attention to the creative design of independent brand products. Health-care socks, Xishi socks, horseshoe socks… Socks with unlimited creativity and distinctive features emerge endlessly. Today, Datang Hosiery has an annual output value of 75 billion yuan and a regional brand value of 110 billion yuan. 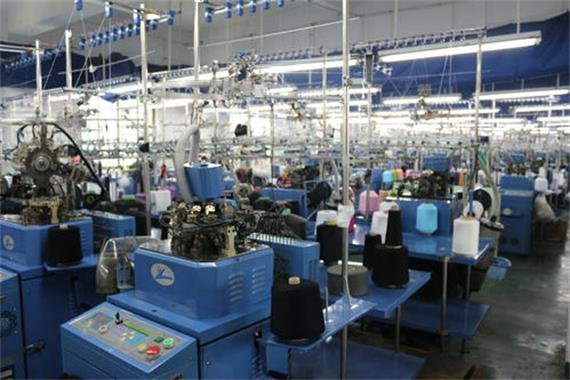 Business strategy during the epidemic

This year, Datang Hosiery, which has recently undergone transformation and upgrading, has encountered a “blocker,” the COVID epidemic. Chen Renyong, who has not given up foreign trade orders before, has decisively adjusted his business strategy.

Chen Renyong said, “Last year we were 30% of foreign trade and 70% of domestic sales. Our export sales were mainly cross-border e-commerce sales. This year we are 100% domestic sales. Our first self-operated store opened in Chengdu on October 1. The current performance is still good.”

As a popular store on Tmall, Cai Shanni’s store stands at the forefront of the live broadcast boom. This year, her shop invited stars and celebrities to sell goods, and sales quickly returned to its former popularity. The goal of 200 million yuan this year is no longer a problem.

Datang, the only characteristic town in the world with socks as its totem, has bid farewell to the label of “overseas socks processing factory” which it was referred to in the past. It is becoming the world’s most advanced hosiery manufacturing center, the world’s top hosiery cultural center, and the world’s only Hosiery tourist destination. Mao Danfei, a member of the Party Committee of Datang Sub-district, said that the goals of Datang people do not stop there.

Mao Danfei said, “We want to be the vane of the world’s hosiery industry. The vane not only means that we have the most cutting-edge products, but also the cutting-edge equipment and concepts. It is not just a pair of socks, but also the embodiment of a beautiful economy.”

Where to Import succulent plants in China
Scroll to top