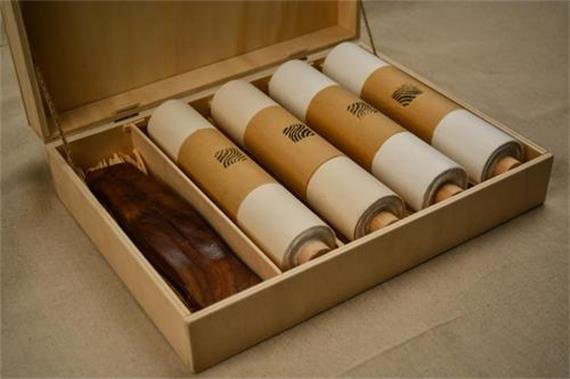 Xuan Paper Town refers to Langqiao Town, Jing County, Xuancheng, Anhui Province, China. Jing County is also the birthplace of Chinese Xuan paper. Xuan paper is a traditional Chinese paper for calligraphy and painting. It has the characteristics of being easy to preserve, doesn’t go brittle for a long time, and will not fade. It has a history of more than 1,200 years. Nowadays, around the Xuan paper town, there are more than 300 Xuan paper and calligraphy paper production enterprises. The annual production capacity of Xuan paper is more than 600 tons. Almost all the Xuan paper in China is produced here.

What is Xuan paper

At the opening ceremony of the 29th Beijing Olympic Games, a real Chinese picture scroll was slowly unfolded with the image of the ancient method of making Xuan paper. On the screen, “Ancient Xuan paper” was made to show the world the beauty, tranquility, and majesty that belongs only to China on a large screen. The worker who made Xuan paper appeared on the big screen was from China Xuan Paper Co., Ltd. in Jing County, Xuancheng, Anhui.

It takes 108 processes to transform from sandalwood bark and rice straw into tenacious Xuan paper, which lasts three years. Among them, there is a process that must be completed by at least two people working together called paper fishing. One person held the tool for making Xuan paper, a palm curtain, and the other raised the tool. With tacit understanding, strength, angle, and speed, the two of them fished out sheets of Xuan paper that were as thin as cicada wings and as white as snow. Zhou Donghong has been working for 35 years, and nearly eight million pieces of Xuan paper were made by him.

Zhou Donghong: The uniformity of the paper, as well as the thickness, quality, and pass rate of the paper are all controlled by the person holding the palm curtain. 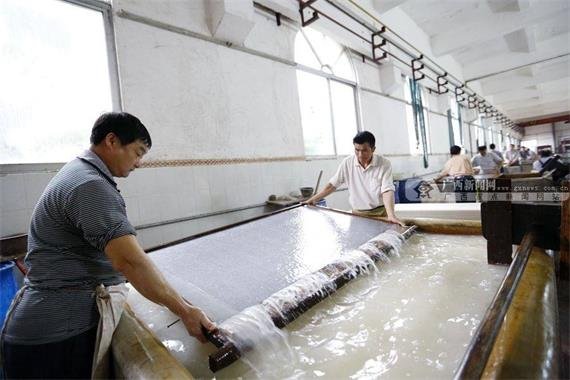 Xuan paper making skills were listed in the first batch of national intangible cultural heritage in 2006 and listed in the human intangible cultural heritage list in 2009. Xuan paper has extremely high requirements for the natural environment such as water quality and raw materials. The sandalwood bark and rice straw need to be repeatedly soaked, washed, steamed, spread, and naturally bleached in the sun and rain before they can be made into  perfect Xuan papers. According to Hu Wenjun, Chairman of China Xuan Paper Co., Ltd., Xuan paper is inseparable from the natural gift of water and soil in Jingxian County, and “fur, grass, water and technology” are indispensable.

Hu Wenjun said: “The first is the raw materials, which must be selected from the palisander bark and sand field straw in Jingxian and surrounding areas; the second is the processing of the raw materials. The singe grass produced in one or two years will be put into production immediately, and there will be no change. The combination of multiple links can create a perfect Xuan paper.”

It was this natural gift that contributed to the prosperity of the local Xuan paper industry. In Jing County, there are more than 540 large and small Xuan paper enterprises, among which 11 are large-scale enterprises. However, when Hu Wenjun officially came to the Xuan Paper Company to take a job, the situation was not optimistic. Over the years, after enjoying the labor bonus, the profits of Xuan paper enterprises reached their peak around 2012, but the subsequent increase in labor costs caused the profits of the enterprises to shrink year by year.

Hu Wenjun introduced: “At first, about one-third of our products were exported to Japan. Later, domestic demand increased and exports accounted for a little less, but they were stable. Since 2013 and 2014, the cost has risen sharply, and now it is still a loss of several hundred per dollar of paper.”

More than 80% of the Xuan paper production that relies on ancient techniques depends on manpower. In the face of rising costs and loss of export orders, Hu Wenjun and his employees also realize that the transformation and upgrading of Xuan paper enterprises is imminent.

Hu Wenjun said: “At the time of cultural prosperity and development, we must also go out, mingle with painters, jump out of paper making, and seek cultural development. We have established scholarships with the Eight Academy of Fine Arts, and opened flagship stores and experience stores in Beijing. ”

The extension of the “high-end” market of Xuan paper is not just what Hu Wenjun thought. Cao Jianqin, general manager of another Xuan paper company, has also carried out a series of attempts and transformations of Xuan paper “going out” in recent years.

Cao Jianqin introduced: “We need to cooperate with some colleges and universities, such as Tsinghua Academy of Fine Arts, to explore the daily use of paper, and see if this paper can be used more in our lives. There are also many precious traditional varieties that are worth visiting. Development, such as the wax paper used in the original palace.”

In addition to the clustering effect of Xuan paper companies, the small town has also enabled the upstream and downstream companies producing Xuan paper to exhibit large-scale growth. 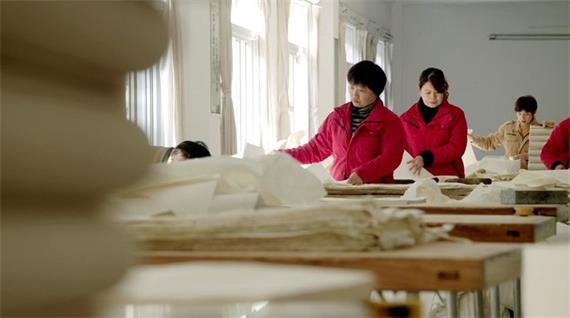 Li Xibao’s  processing plant began supplying raw materials for Xuan paper companies more than 20 years ago. Li Xibao said that late autumn is when they are busiest and when they can see the most benefits.

Li Xibao: Net income. We have 20 peasant workers who use their slack time to process for us. Their general salary is more than 10,000 yuan. This is for every family. Both bring a lot of income.

Li Xibao supplies one million catties of raw materials to Xuan paper companies every year. Upstream Xuan paper companies like this have formed a large-scale supplier team in Jingxian County, including about 50 grass embryo suppliers, 11 sing grass suppliers, and about 70 leather suppliers. Among them, Shatian straw uses the form of contract agriculture to sign annual purchase and sales contracts with large grass farmers every year, which solves the problem of straw burning in about 15,000 acres of rice fields and turns waste into treasure.

Xuan paper is not only a business, but also a culture. Zhu Daguo, Chairman of the Xuan Paper Town Co., Ltd., stated that the number of visitors to the “Chinese Xuan paper Cultural Park” supported by the Xuan paper industry has increased by more than 40% for three consecutive years. In 2019, it received 200,000 tourists and sold more than 30 million tickets. At present, the preparatory work of the second phase of the Xuan Paper Town project has started, and a “Xuan Paper Town” integrating a skill display area, an art exchange area, a Xuan paper production area and an art Yiyang area will soon be shown to the world.

Zhu Daguo said: “The second phase of the project mainly consists of a few parks opposite the Cultural Park Museum, as well as an artist settlement, a four-star hotel, and the intangible cultural heritage center is also concentrated in that area.”

Near the plant of China Xuan Paper Co., Ltd., tourists from inside and outside the China Xuan Paper Museum are in constant flow. Visitors in this museum of more than 10,000 square meters, wander about in the five thousand years of traditional Chinese culture. Geng Peng, secretary of the Jingxian County Party Committee of Anhui Province, said that, with the support of industry and the soul of culture, the Xuan paper town should not only benefit the people of one place, but also let the Xuan paper culture enter thousands of households. 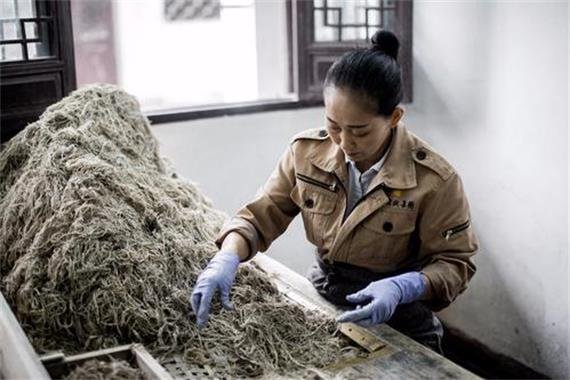 The most famous socks town in China—Datang
Scroll to top