The card of Tangwu town

Tangwu Town is located in Changle County, Weifang City, Shandong Province, China. It is known as the “China Electroacoustic Instrument Base.” There are more than 100 musical instrument manufacturing and supplier supporting enterprises, which produce 800,000 musical instruments and four million sets of musical instrument accessories every year. China accounts for more than 30% of the output of electric guitars. It is also the foundry site of internationally renowned musical instrument brand, Fender, and others. The products are sold to more than 20 countries and regions including South Korea, Japan, the United States, and Europe. According to statistics, China’s guitar output accounts for 60% of the world’s total output. China has become the world’s largest guitar production base, and Tangwu town has become an indispensable part of the world’s guitar industry.

But in the 1970s and 1980s, people here didn’t actually know guitars. Guo Xuemei, deputy head of Changle County, introduced that in the late 1980s, a musical instrument dealer in South Korea established a joint musical instrument company in this town, and they produced acoustic and electric guitars there. She said: “Our local farmers went abroad for three months to six months of technical training. In that era, we established the concept of guitar production, and this concept has driven the development of our other industries. Several companies have begun to grow bigger and stronger.” After more than 40 years of development, Tangwu town has become a well-known “guitar town” at home and abroad. In an area of ​​more than 200 square kilometers, there are nearly 100 musical instrument manufacturers and suppliers supporting enterprises. In the center of the town, a huge red electric guitar stands eye-catching, with the words “China Electroacoustic Musical Instrument Industry Base.” There are many workshops for making guitars on both sides of the well-shaped street in the town. At present, the annual output of electric guitars in Tangwu Town exceeds 800,000, accounting for one-third of the country’s total output, with a turnover of 1.5 billion yuan. The guitars produced here are exported to many countries and regions such as Germany and Japan. The town also produced guitars for famous international brands such as Fender, and many world-renowned guitar masters also come here to customize guitars. Lv Haiwei, deputy secretary of the Party Committee of Juanjun Town, said: “Now we are exporting more than one million pieces each year.” Although the industry has grown, the guitar town has faced the dilemma of OEM export for a long time. The export price of a guitar is 1,000 yuan, but it can sell for 1,000 US dollars abroad. The huge price difference makes many companies in the “guitar town” less profitable. Zhao Fengde, the founder of a musical instrument brand in Tangwuzhen, said that this has made them determined to establish their own brand. “Since we can do a good job of products, why can’t we create our own brand? What we require is to win by quality, not by quantity,” he said.

In the past ten years, many manufacturers worked hard to improve product quality under the leadership of some local leading companies. Ma Ying, charger of a musical instrument factory in the town, said that the development of industrial clusters has also made the musical instrument factory in the town more confident and take up a larger slice of the market. “We don’t copy, we design ourselves and innovate ourselves. In fact, whether it’s the traditional marketing method or the current e-commerce model, we can find ways suitable for our products. And enterprise cooperation can also promote the quality improvement of all enterprises in our electric guitar industry cluster,” Ma Ying said. 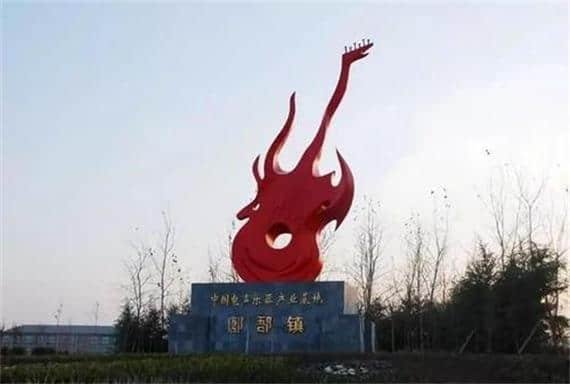 With excellent quality as a guarantee, Fengde Zhao said that in the past five years, the self-owned brands created by Tangwuzhen have become more famous, and many professional musicians from well-known bands have also become their fans. He stated: “This year we have cooperated with some companies in Southeast Asia. A Thai agent wants to act as an agent. This proves that we earn the recognition, and companies from other countries want to cooperate with us.”